An Evening with Neil Ruddock 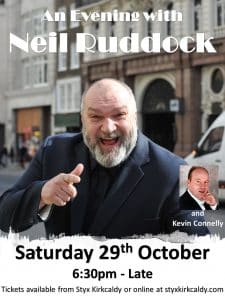 Styx Kirkcaldy an Evening with Neil Ruddock on Saturday 29th October 2022 from 6.30pm til late.

Neil “Razor” Ruddock is an English former professional footballer and television personality who is a club director at Enfield. As a player he was a central defender from 1986 to 2003 and was voted the 17th “hardest footballer of all time”. He made his debut at Millwall, having been associated with the club since the age of 13, and represented Tottenham Hotspur, Southampton, Liverpool, West Ham United, Crystal Palace, Queens Park Rangers and Swindon Town during a professional career spanning 17 years. He was capped once by England, in 1994. Ruddock came out of retirement in 2015, aged 46, to play for United Counties League side Wellingborough Whitworth. He has since appeared on a variety of television shows including, I’m a Celebrity… Get Me Out of Here! and Celebrity Masterchef. Neil will be joined BBC ‘Dead Ringers’ Comedy Impressionist Kevin Connelly is one of the UK’s best comedy impressionists. Born and bred in Middlesbrough, Kevin developed his talent at school mimicking fellow students and teachers. Whilst working as a hotel restaurant manager in Yorkshire, Kevin would entertain the diners with a selection of his comedy impressions. After being spotted performing his impressions in the restaurant, public interest in Kevin grew and professional gigs followed. After numerous successful events, Kevin quit his day job and became a full-time impressionist.